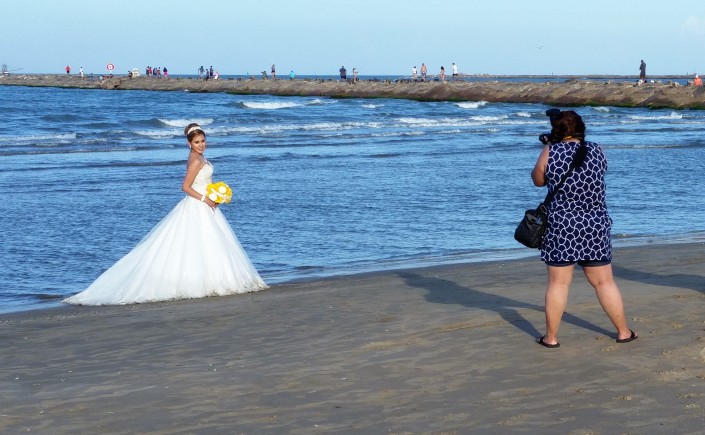 Every fly fishing trip has one primary goal and that is to catch a fish on a fly. Preferably more than one and bigger the better, but that does not always happen. Because of fast access to social media, instant gratification/instant posting is now the norm. With a camera app on a cell phone being two clicks away at the most, that first fish photo gets pretty quick accolades from your fishing friends in your social circle that are not on the water.

What happens when nothing is caught? Photos of sunrises (or sunset) from the jetties or from a saltwater flat become plentiful when nothing else is going on. Depending how jaded your friends are, a sunrise post might be met with jeers instead of cheers because they know no fish have been caught and the drag on your fly reel is still at room temperature. Never mind the fact that they are stuck back at their office opening file drawers instead of fly boxes or are at home cutting the grass and not tippet fishing line.

As fly fishermen we also like to think we are out there for the experience, the ambiance, and the ________ (you fill in the word). In reality it is to see who can post a fast fish pic to achieve the biggest bragging rights and/or “likes,” at least for that particular day because tomorrow all slates are wiped clean and the race (or posts) starts all over again. A cell phone as a communication device has become more stunningly powerful than the phasers, set to kill, on a Star Trek episode.

Again, what happens when nothing is caught? To avoid that most knowledgeable fly fishermen like to stack the odds in their favor. Tide tables are checked, the horrible moon phases are avoided, and the forecasted wind speeds are investigated. When all of those factors are in a favorable agreement, plans are made and sometimes a religious candle might be lit for added insurance.

Unfortunately sometimes things change in a proverbial heartbeat. Walking out on a Texas jetty that juts out into the Gulf of Mexico and spotting an incoming shrimp boat whose name, “Murphy’s Law,” is proudly painted on the side does not help. Stringing up, a quick peek discovers a key fly box is missing as well as the spool of recently-bought-for-this-trip 40 pound fluorocarbon leader material. Murphy has indeed arrived.

The county beach park access fee has been paid, the long walk down the sandy beach past the gawking sunbathers has been done, and the 70-SPF sunscreen is getting put to the test, so might as well cast anyways.  Most of the saltwater fish off of the jetties have sharp little teeth so using the next-to-the-best fly on hand at the end of the soon-to-be-cut thin bite tippet is not a terrible concern. Getting cut off is not a question of “if,” but rather “when.”

The first left-handed cast into the channel side is a surprise as the expected headwind is now a left to right crosswind. Most fly casters do not get to see a large tarpon fly go whizzing past six inches from their eyes. Sunglasses serve a dual purpose, one is to see into the water with polarizing lenses and the other is to protect your eyeballs. Ducking and cursing out loud helps, but at this point the shrimp boat is way down the channel and Murphy is probably not listening anyways.

Casting backwards left-handed works. However the added strain on the left elbow further aggravates the beginning stages of tennis elbow that occurred when lifting that damn Yeti into the truck in preparation for this trip.

Unfruitful casting for hours is normal when hunting for Texas tarpon. Casting from the jetty there is persistent hope that a tarpon is within reach and lurking below the surface of the wavy water. Landing a Texas tarpon is indeed a high prize and very worthy of twittering, (Face) booking it, or posting on other forms of social media.

More often or not, just jumping a tarpon will occur. This means a tarpon hit the fly, a hook-set was made, and the tarpon disagreeing with what it just ate jumps up into the air, voraciously shaking its head in an attempt to dislodge the fly. At the best, the entire tarpon is in the air which is quite thrilling to see and you get your fly back unfortunately coming back at you at 60 MPH. This used to be told in a proud loud voice back at the club, the office, or over the phone when phones were once you used to call people. In the past, with a cigar in one hand and a whiskey with water in the other, one could say with pride, “I jumped 2 tarpon today.” Photos of tarpon in the air are difficult to capture when fishing by yourself, so in today’s “show me” culture, no picture means no electronic pedestal is achieved.

Today the tarpon are rolling beyond the reach of a 9-foot fly rod so wrapping up and going home becomes the next goal especially because tennis elbow shows no mercy in recovery. Every cast has added days to being pain free. Arriving way after sunrise and departing way before sunset precludes any of those photos being posted and if no one knew your plans for the day, no one really knows you went fishing and got skunked.

The only thing remaining is the long walk back to the truck past the throng of thonged sunbathers and their inquisitive suntanned eyes. All of those eyes want to ask, “Did you catch anything?” or “How many did you catch?” In this day and age “catch and release” is still a foreign concept to many people so the answer to the first question is quite obvious to them walking back empty-handed.

Even if a tarpon had been landed, keeping and eating one is out of the question for a variety of reasons. This also creates another question, “Why fish for something so inedible, so hard to land, and so rare to get a hook up?” Before I can contemplate a better answer than, “Because they are there,” I see something very unusual on the beach near the end of the jetty.

A very young bride in a white bridal dress is getting her picture taken on the beach. It is a very nice dress and thankfully the surf is very calm as the diminished waves gently roll up to the bottom of the dress. Her makeup and hair is top notch and in her hands is a large yellow bouquet.

I do not know what footwear she has on if any. High heels would not be sensible on the wet sand nor would cowboy boots, the current Texas rage. I pause on the beach to watch as the bride’s photographer goes through the motions to capture what will probably result in a huge portrait and from one photographer to another, hopefully a hefty check.

In a micro second I see the bride’s expression go from a full-white-teeth-smile to crooked lips cringing in horror. As the last wave of water was receding underneath her dress, the wave eroded her footing on the sand below her feet. Both of her arms started to windmill in motion, trying to stay balanced.

Knowing that a backward spill was imminent, on one of the windmills she sent the bouquet sailing high in the air away from the water in my direction and I watched it land with a thud nine feet in front of me.

I suppose I could have made a diving catch like an outfielder flying out horizontally after a high pop fly. However, I had my favorite G. Loomis fly rod in my left hand, several thousand dollars worth of camera gear in a waterproof bag in the other, plus I was already married.

The bride regained her footing and did not make a big splash (no pun intended), the photographer continued shooting nonstop, and I resumed walking down the beach knowing that I did not catch a fish, but I almost caught the bouquet.

The good news this past weekend was that I won a national photography award from the Outdoor Writers Association of America (OWAA). It is a close up photo of a redfish’s tail. Rather than being published in a magazine or newspaper, this one was used on a display in a fly fishing shop in Houston, TX.

Sometime late last year Shimano contacted me about purchasing some G. Loomis related fly fishing photos as they were going to revamp the photos in one of the Fishing Tackle Unlimited (FTU) stores in Houston and include photos and signage in a new store FTU planned on opening in Sugarland, TX.

This was the first time I was eligible to enter photos and stories in OWAA’s Excellence in Craft contests. Now I cannot wait until next year’s contest.

This is another oldie, but goodie. This ran in my now defunct blog on the San Antonio Express-News newspaper Racks & Reels section.

Men Who Stare at Fish

I am reintroducing my blog  with a story about my good friend Colin Cameron who passed away earlier this year. This is a story that ran on my now defunct blog on the San Antonio Express-News newspaper Racks & Reels section. This won a TOWA for outdoor writing. I hope you enjoy it.

On a 3X Wing and a Prayer